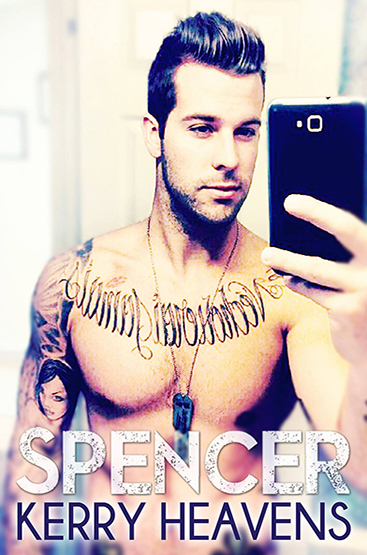 @TheSpencerRyan exudes confidence,
I mean, have you seen him???
His dark good looks and tattooed muscled perfection are too much.
He's hot. Lickably hot.
And he has a way with words that leaves me breathless.
But cocky doesn't even cover it,
this guy is so arrogant you have to fight back.
But God he's so lickable!
The thing is though,
he looks like sex but he'll taste like jackass.

@OMGJazzyP is a sexy, annoying ball of rage in fuck-me heels
and she hates me.
Although her nipples would tend to disagree.
It's a deadly combination.
She’s a princess.
And when I say princess, I mean intolerable, spoiled brat with a tiara.
Sure she's got that curvaceous goddess thing going on,
but that mouth of hers...
God it needs something in it to shut it up.
#GotJustTheThingRightHere

This is not your average British romance.
It's a tale of high heels, hot tattooed bad boys and
sex oranges, all wrapped up in a coating of chocolate.
It's 'love' in a social media world,
where not everyone is who they seem
and where some people’s bios should carry a warning.
#JustSayin

The sight and smell that greets me is just the same as it was yesterday. Bowls and utensils everywhere; and an incredible smell of chocolate and trays with neat lines of rolled truffles. Except today, I notice it. How did I miss all this crap yesterday, chocolate usually comes above everything!
Oh, but yesterday I was on a mission.
Drooling, I head around the counter and pick up a ball of chocolate from one of the trays, savouring it as the flavours explode in my mouth. Dark chocolate with some kind of boozy fruit flavour. God, it’s good.
And she did this?
She’s dangerous.
A woman who looks like her, thinks like her, wears those shoes, gives me shit and makes stuff like this, is a danger.
If I had a heart, I’d be falling in love.
I come to a big bowl of soft looking chocolate goo with a spatula sitting in it. I dip my finger in the gooey goodness and lift it to my mouth.
Holy hell! That is fucking amazing. It’s ginger and dark chocolate with some alcohol. Damn. I want to put my face in the bowl. I glance around, then shrug. Lifting the spatula out, with a decent scoop, I lean against the counter and take a good long lick.
“What the hell do you think you’re doing?” she barks as she comes into the kitchen.
“Just having a taste, Princess,” I reply, turning to let her see me take another lick.
She storms over, trying to grab the spatula out of my hand. Good luck with that sweetheart, this is me and chocolate. You ain’t getting it back.
“You can’t just wander in here whenever you feel like it.”
“The door was open.”
“Give that back!” she demands, catching hold of it. For a second we both pull at it, but then I see an opportunity and let go. Chocolate splatters her face, neck and chest and stops her dead in her tracks.
I choke on a laugh.
She looks at me, mouth open, “You did that on purpose!”
I shrug.
She glances down at the mess on her chest and my eyes follow, locking in on her begging nipples, visible through her dress. She looks embarrassed.
“It’s ok, Princess, I know they like me even if you don’t. Happens whenever I’m around.”
“It does not!”
“Mmmm-ok.”
I step closer. She backs off, but I catch her arm and pull her close.
“What are you doing?” she gasps.
“I don’t waste chocolate,” I reply softly and then lean in and swipe my tongue over her temple.
She wriggles, but it’s a weak effort. “Get off me,” she demands.
“Hold still, Princess, it’s all over you.” I take another lick at her cheek and move down to her neck.
“Ok, that’s enough,” she snaps, her breath catching in her throat as I suck in her earlobe.
I lick her neck just below her ear even though there’s no chocolate there and the way her head falls slightly back in surrender makes me swallow hard. “It’s never enough,” I murmur.
What the fuck?
I shake the sappy shit out of my head before I grow a vagina, and pluck the spatula out of her hand, painting a trail down her cleavage. Dropping the spatula on the floor, I grab her by the arse and lift her so that I can lick it all off. She yelps and struggles and I plonk her down on the kitchen counter, leaning forward and feasting on the stripe I painted between her breasts. Her dress is ruined, shame, I quite liked it.