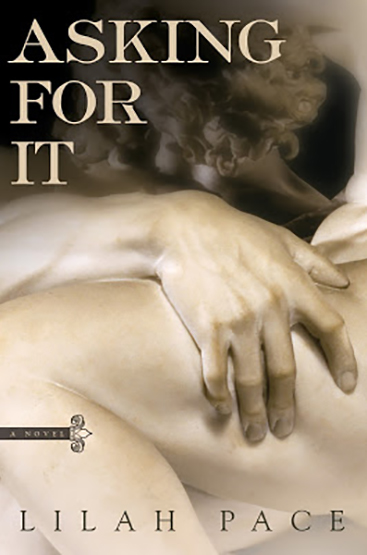 “This is who I am. This is what I want. Now I need a man dangerous enough to give it to me.”

Graduate student Vivienne Charles is afraid of her own desires—ashamed to admit that she fantasizes about being taken by force, by a man who will claim her completely and without mercy. When the magnetic, mysterious Jonah Marks learns her secret, he makes an offer that stuns her: they will remain near-strangers to each other, and meet in secret so that he can fulfill her fantasy.

Their arrangement is twisted. The sex is incredible. And—despite their attempts to stay apart—soon their emotions are bound together as tightly as the rope around Vivienne’s wrists. But the secrets in their pasts threaten to turn their affair even darker...

He rises from the bench as I walk to him, an old-fashioned, almost chivalrous gesture that touches me in a way I can’t define. As we sit down together, he says, “Is everything all right?”

At first he says nothing. His expression remains cool. Is he that controlled? Will he just get up and walk away like none of it ever happened?

But it couldn’t have ended any other way.

Finally Jonah speaks. “You weren’t unhappy with – what I did at the benefit.”

“No.” God, no. When I think about the way he slid his fingers inside my panties, I want to take back everything I’ve said, grab him by the collar and drag him into the nearest building for a quickie in the stairwell. It would be as scorching hot as every other time Jonah’s put his hands on my skin.

And it would only be delaying the inevitable.

I take a deep breath. “This isn’t about anything you did wrong. Okay? You’ve kept every promise. You made me feel safe at moments I don’t think any other man could have, ever. And you –” My voice breaks. Dammit. I pull myself together. “You saw something in me I’ve always hated and made me feel less ashamed of it for a while. So thanks for that. And the sex. Definitely thanks for the sex.”

My crooked smile doesn’t fool him for a moment. Jonah leans forward; he brings his hand closer to me, as if he’ll touch my shoulder, but rests it on the back of the bench instead. “Vivienne, what’s wrong?”

This is normally where I bunt. Where I take the gentlest, easiest out for everyone involved, so we can walk away with no hurt feelings, no unresolved conflicts.

I’ve always thought of it as consideration, or poise. Doreen says it’s dishonesty, and asks me what would happen if for once in my life I just told the ugly truth and let people deal with it.

Jonah already knows one of my uglier truths. What the hell.

“I thought I could have sex outside of a relationship, with no strings attached,” I say. “I did in undergrad, like anyone else. Probably I could do it again with someone else. But you and me – it’s not a normal situation. Not only because of, you know, the fantasy –” I glance around, but few students walk anywhere near us, and every single one is either wearing earbuds or absorbed in their cell phones. “It’s more complicated than that.”

“Our arrangement is simple,” he says flatly. “We were very specific about what this would be and how we would handle it.”

“This isn’t about logistics.” I look upward at a pale gray sky, the kind you see when the clouds have claimed the entire sky. Truth. Tell the real truth. “Jonah, every time I’m with you, it’s more than sex. Every time, I turn myself over to you, completely. I have to give you total control, and total trust.”

“I haven’t abused that trust, have I?”

Shaking my head, I say, “No. But don’t you see? I don’t just fuck you, Jonah. I bare my soul to you. Then we go back to being almost strangers to each other. The disconnect is getting to me, and I don’t think I can handle it anymore.”

Despite all our rules and resolutions, I have begun to have feelings for Jonah. To feel jealous of other women he might touch. To want to have not just his body but his heart. That means I want too much. Which in turn means I have to get out, now.

Holy mother of all book hangovers! I just might cry because I just had to dig into Asking For It by Lilah Pace even knowing there would be a bit of a cliffhanger (because there will be a second book called Begging For It).

But I’ll be honest. I was not initially drawn to this book. While I don’t think there is anything wrong with the synopsis – because it really is very true to the story – I found for some (including myself) the rape fantasy part of the story it could be a little off putting. However, for some the synopsis is what made it a must read. To each his own.

So. It took a dear friend of mine basically demanding I read it during RT for me to finally pick it up. And let me tell you – I could kiss her!

Not only did Asking For It have the story to go behind the topic where a girl has rape fantasies, but that story was so addicting and captivating I could NOT put it down until the end!