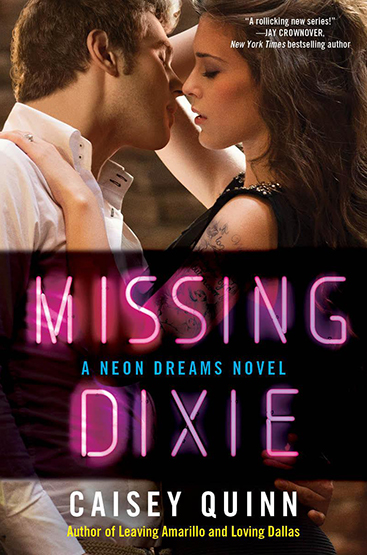 I've lived most of my life in darkness, beneath the shadows of secrets and addictions. The last thing I ever wanted to do was hurt the only girl I'd ever loved-the one who brought me into the light. In my entire life I'd made one promise-a promise I'd intended to keep. I've broken that promise and now I have to live with the fallout. Dixie Lark hates me, and I have to tell her that I love her. I also have to tell her a truth that might destroy us forever.

Can she love me even if she can't forgive me?

Learning to move on…

Gavin Garrison broke his promise to my brother and he broke my heart in the process. I may never love anyone the way I've loved him, but at least I won't spend my life wondering what if. We had our one night and he walked away. I'm finally beginning to move on when my brother's wedding and a battle of the bands brings us back together.

Our band is getting a second chance, but I don't know if I can give him one. How do you hand your heart back to the person who set it on fire once already?

When Dixie finishes, she takes her place across the altar and I can’t tear my stare from her. Her sapphire eyes shine like diamonds with the promise of tears.

I wish I could give you this.

Right as I’m about to look away, her gaze collides with mine. My heart swells in my chest. I have so much to say and no words to say it.

She doesn’t even flinch at the turmoil I know is probably apparent on my face. She just gives me a confident smile and a knowing look as if to say, One day.

One day that will be us.
A future.
A forever.

I fucking hope so.

I just have no clue how we’ll ever manage to get there.

When we last met Dixie Lark in Loving Dallas, she was back in Amarillo after taking what I like to call her “walkabout,” a trip across country in her grandparents RV.  Now, she’s living in her grandparents’ house, giving music lessons to underprivileged kids, and waiting for Gavin to get a clue and come back to her.  But he sure is slow.

For his part, Gavin’s working in a bar, trying to get through his parole without any more drama to trip him up, and basically walking the straight and narrow.  But life on the straight side ain’t easy, especially with a mom who’s a junkie and a past that seems to haunt him at every turn.  Gavin’s not feeling the love for himself, but he’s still feeling strongly about our girl, Dixie.  The problem is that with all of the wrong he’s done in his life and all of the problems that follow him around, he just doesn’t think he deserves her.  See, Gavin’s got Dixie on a pretty high pedestal, and from where he stands, there’s just no way a guy like him can or should reach so high.  But what if you’re Dixie, real flesh and flawed bones, and you know that no matter his demons, no one else will ever do?

Now, I’m a romantic at heart, and I like to believe that people can work anything out, but I’ve learned enough in life to know that an addict (and let’s make no mistake that Gavin is an addict) will always be an addict.  It takes constant vigilance and active work to live a life that isn’t dictated by addictions.  And loving an addict?  Well, that’s a road a person has to be willing to take in hope and faith because, unless the addict is fully committed to living clean, it’s a short ride back to the Dark Side.  Loving and living with an addict is risky business, but that doesn’t mean it might not be worth it in the end.  They key word here is “might.”

Gavin’s got a history with drugs, alcohol, sex and a wealth of anger that can and does explode rather violently.  At the same time, he is rich in love, loyalty and tenderness.  If I were Dixie, I’ll admit it: I’d be captivated.  But if I was Dixie’s best friend, I might just be telling her to run for the hills.  And there’s the rub.  The courts may be ready to send Gavin back to anger management, but he needs a whole lot more than that.

In spite of all the heartache and angst, Dixie just can’t let him go, but she’s no sucker either and I love that about her.  She’s feisty and perfectly willing and able to stand up and speak her mind to anyone who needs a come-to-Jesus moment.  Dixie’s done a lot of growing up since Leaving Amarillo; at the same time, some things never change.  Gavin can and does make all reason flee Dixie’s mind when he’s close, and she finds herself over and over in his arms.  Despite all evidence that she should run for the hills, she just can’t quit him.

Then there’s Dallas—still herding cats.  I tried not to, but every time he’d call and ask either Gavin or Dixie about a decision for getting the band back together, and they’d put him off (again!), I giggled.  Poor Dallas.  That man has the patience of a saint.:)

But what about the band?  It’s music that kept these three sane and together, that healed them all from a childhood filled with loss, so after their separate journeys they’ve had to travel, one can only hope that music will bring them all back together again, will bind them.  Stay tuned…

There’s a twist in this story that I never would have imagined back at the beginning.  I won’t even hint at it here because I think it needs to hit you, dear reader, the way it hit me.  It’s a chance for redemption and a new beginning; it’s a chance to right some wrongs and do things better this time around, and I think it will fill you with the same cozy glow that it filled me.

Missing Dixie gives us a full-circle conclusion to this series that we may have never known we needed, but in the end, made perfect sense.  In a way, I think of it actually as a bonus ending.  You get one ending with Gavin and Dixie, the story of the band; basically, you come back around to the beginning, to what forged that bond and how it persevered.  Then this surprise comes along, and it’s like a bonus chapter—but better!

Let’s face it, this is not Caisey Quinn’s first rodeo with the story of an addict, but no one writes the complex relationships, the light and the darkness of loving one, better.  Gavin and Dixie’s story is one you shouldn’t miss.  It’s the messy stuff of life and love, and all the reasons we keep chasing it.

Caisey Quinn is the bestselling author of more than 15 full-length books, including the Neon Dreams and Nashville's Finest novels. She splits her time between a small town in the middle of nowhere in Alabama, where she lives way out in the woods, and Nashville, TN. She lives with her husband, two-year-old son, and eight-year-old daughter.