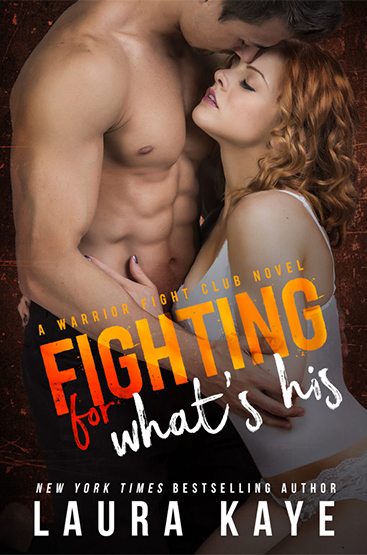 This fight club has one rule: you must be a veteran...

Resisting her only makes him want her more...

Private investigator Billy Parrish is good at three things—fighting, investigating, and sex. MMA training with the other vets in the Warrior Fight Club keeps his war-borne demons at bay—mostly, and one night stands ensure no one gets too close. But then his best friend from the Army Rangers calls in a favor.

Shayna Curtis is new to town, fresh out of grad school, and full of hope for the future. With a new job starting in a month, she’s grateful when her brother arranges a place for her to stay while she apartment hunts. But she never expected her roommate to be so brooding. Or so sexy.

Billy can’t wait for Shay to leave—because the longer she’s there, the more he wants her in his bed. To stay. He can’t have her—that much he knows. But when fight club stops taking off the edge, Billy lets down his guard…and starts fighting for what’s his.

That was the tenor of Billy Parrish’s thoughts as he fought through Friday night rush hour traffic on the way to his rowhouse in Upper Northwest D.C. The leads on his case had gone stone cold. His charging cord wasn’t working and his phone had died an hour ago. And he was late.

He fucking hated being late.

Especially when it involved a favor for one of his brothers. Didn’t matter that Billy wasn’t enthusiastic about this particular favor. He’d known Ryan Curtis for more than a decade—since West Point, had fought and bled by his side, and owed the guy for having saved his life. So when Ryan had asked, Billy had said yes. Simple as.

Not that he thought having Ryan’s kid sister in his house for the next two months was going to be simple. Not when her very presence and his obligation to look out for her was going to be one helluva cockblock.

Finally, he turned into the alley that ran behind his rowhouse on Farragut Place and pulled into the parking spot behind his house. He killed the engine and, for just a few moments, sat still and listened to the rain hammer on the roof of his Explorer.

Christ, he was tired.

Problem was, he slept like shit unless he did one of three things—fuck, fight, or choke down one of the year-old Percocets his doc had prescribed back when things were bad. Or, at least, worse than they were now. Billy tried like hell to avoid taking the pain pills, but that required the fucking or the fighting.

Neither got rid of the phantom pain. Hell, both often made it worse. But they managed to quiet all the shit in his head, and that was what he needed more than anything else.

He blew out a breath and forced his ass out into the rain, and it was with his first steps in the direction of his house that he noticed. The lights were on inside.

Prickles ran over his scalp and his blood turned to ice. Because he hadn’t left them on. On the day that Ryan’s sister was arriving, some asshole had broken in?

He raced to the basement door and let himself in as quietly as he could. He traded his dead cell phone for the gun in the holster at the small of his back. And then he went in search of the scumbag whose day was about to get even worse than his.

Billy eased up the steps to the door that opened into the kitchen. He winced at the creak of the hinges, cleared the corner, and then stepped into the light. One, two, three heartbeats, and he swung around the corner to find that the first floor appeared empty. Still, he cleared the entire space methodically.

Billy’s eyes drifted to the ceiling above him. Gotcha.

He kept his footfalls light as he ascended the stairs, stopping to check the second-floor hallway before climbing all the way to the top. His bedroom door remained closed, but light poured out of his office and from under the bathroom door.

He frowned in confusion.

Gun at the ready, he made for the bathroom, his free hand reaching for the knob.

The door swung open on its own.

Four things happened pretty much at the same time. The woman screamed, jumped backward into the door, slamming it against the wall behind her, and dropped a pile of clothing to the floor.

And then the towel she wore around her chest came unknotted and swung open, baring every inch of her.

“Jesus fucknugget, Billy!” the woman screeched, her hand going to her heaving chest just above her breasts. Her bare breasts. Full with pink nipples that tipped upward. She had a heart-shaped watercolor tattoo on her right hip. And her hair was red everywhere…

In a heartbeat, Billy whirled away and lowered his gun, his mind racing as he reholstered the weapon. “Shayna? How the hell…”

Small brushes of fabric against fabric sounded out from behind him, as if she was resecuring the towel. Over her body. Which he’d just seen naked. “You were late. So…”

“So…?” He went to turn back and reconsidered, bewilderment morphing into regret of the holy shit I just pulled a gun on Ryan’s sister variety. “You, uh, decent?”

“As decent as I get,” she said with a kind of hysterical humor in her voice. Her footsteps retreated toward his office—her room, now.

And that little bit of humor had his regret morphing yet again into somewhere north of pissed off. Billy turned just as she disappeared inside the bedroom. He stalked after her. “How the hell did you get in here? I thought you were a burglar and nearly shot your ass.”

Picking clothing from the exploded disaster that he assumed had once been a packed suitcase, she gave a rueful chuckle. “Number one, my ass was the only part of me you didn’t nearly shoot. And, B, would a burglar seriously take the time to close the door while they were using a stolen bathroom? And three, my brother’s a Ranger.”

A Ranger who’d taught his little sister to pick a lock, because of course he did. Billy nailed her with a glare as the rest of what she’d said sank in. “You said number one, B, and three.”

Her laughter, even a little nervous as it was, was like the sun cresting the horizon—it brightened the whole fucking room. “That’s what you want to talk about right now?” she asked, peering at him with those blue-green eyes as she pulled a pair of black underwear from the jumble. A blush still colored her cheeks and chest. And the waves of her wet red hair set off the pale creaminess of her skin, as had the reds and oranges of the watercolor heart.

None-the-fuck-of-which he should be noticing or thinking about. Billy crossed his arms. “You’re not funny.”

“I’m a little funny,” she said, coming to stand right at his side. She knocked her arm into his. “But I am sorry for scaring you. Also, hi. Nice to see you again.”

He inhaled a deep breath meant to calm, but it was a mistake. A big one.

Because he got a lungful of peaches and a sweetness that was all Shayna. Shayna, who was Ryan’s kid sister. Except…nope. Not one goddamn thing about the woman standing next to him belonged to a kid. And he would know since he’d seen nearly the whole beautiful package. “Hi,” he said. “Welcome to D.C. Sorry I nearly shot you.”

She grinned, and it was crooked, with one side of her mouth drawing up higher than the other. “No harm, no foul,” she said, and then she held up the ball of clothing in her arms. “I’m going to go get decent-er.”

Between the smile and the sarcasm, now he was thinking about her mouth… “You do that, Goldilocks.”

Her brows cranked down, and then she chuckled. “Ha ha. Except I didn’t try out your bed, just your shower.”

And. Now. He. Was. Thinking. About. Her. In. His. Bed. “Don’t you have some clothes to put on or something?” Which was not something he typically said to a woman. But Shayna Curtis wasn’t any woman.

She was one of his best friend’s sisters. A best friend who’d asked him to watch out for her. And therefore she was ten kinds of off-limits.

“Yup,” she said, nearly running back to the bathroom.

Billy just stood there and dropped his head forward. He was so fucked.