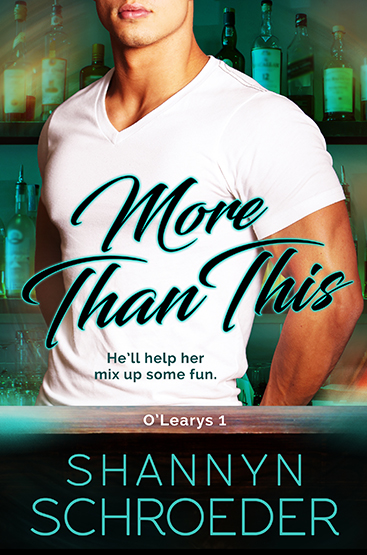 A sexy bartender stirs up a daily lesson plan for an adventurous teacher...
When she discovers her ex-husband is about to be a father, Quinn Adams is on a mission. Determined to get pregnant without the commitment of a man, Quinn sets out for her own adventure. But everyone seems to think she need to focus on herself first. With a list of challenges compiled but her sister and their friend, Quinn embarks on some life-altering fun.
Her first challenge is to go on five dates within two weeks. After a few disastrous attempts, Quinn’s ready to give up—until sexy bartender Ryan O’Leary offers his assistance. Ryan is the go-to person for everyone in his large family, so it’s natural for him to want to help Quinn. However, as they get to know each other better, friendship with Quinn isn’t enough for him. Now, it’s time for him to show her how serious the Irish can be. Will the bartender quench Quinn’s thirst by mixing up more than she ever imagined?

Quinn stood outside her loft, wishing that she’d been smart enough to meet this guy at the restaurant, if that’s what you could call it. It had barely been a step up from fast food. Now he stood in front of her, still talking about himself, when all she wanted to do was curl up on the couch with a good book. This is what she got for picking a guy based on his online profile. Next time she’d make sure she had at least a phone conversation before making a date.
Jeff suddenly stopped his rambling and asked, “So, I think we really hit it off tonight, right?”
She stared blankly at him. Lying had never come easy to her. “I had a pretty good time.”
He stroked her arm, and she locked her knees to stop herself from pulling away. He wasn’t a bad guy. He didn’t give her the creeps. Jeff was even kind of good-looking: tall with dark hair and brown eyes, a little on the skinny side. But something turned her completely off.
When his hand stopped stroking her arm and his fingers interlocked with hers, the sweatiness of his palm was apparent. Eww. How was she supposed to disengage without seeming like a bitch?
“I’d like to see you again.”
“Maybe. Why don’t you send me an e-mail and we can set something up?”
“Can I have your number?”
She shifted slightly to the left, nearer to the door. “I don’t like to give out my number to too many people. This was just our first date and all.”
“But definitely not our last.” He leaned in to kiss her.
She saw it coming, thought she’d get a little peck on the cheek, but his mouth crashed into hers. When she didn’t immediately open her lips, his tongue poked and prodded. It was slimy and gross. When she tried to step back, he pulled her closer. The quick move startled her and in her shock, she inadvertently opened her mouth.
That was one hell of a mistake. He jabbed his tongue so far into her mouth, it was like he wanted to inspect her molars. And he was a sloppy kisser too. Saliva everywhere.
Her stomach started to churn just as he pulled away. “How about we take this upstairs?”
Not in this lifetime. “I don’t sleep with guys on the first date.”
“There’s a lot of territory between a kiss at the door and sleeping together.” He waggled his eyebrows at her.
Like she wanted to dry-hump that? “No, thanks. I should be getting in. It’s late and I have work tomorrow.”
“Oh, okay.” He really sounded disappointed. “Maybe we can get together this weekend.”
She slid toward the door, hoping he’d get the hint and not try to swoop in for another kiss. “I’ll be pretty busy this weekend. End of the school year stuff. But send me an e-mail. Good night.”
She didn’t wait for him to respond. She practically ran for the door. After scrubbing her mouth twice and then throwing her toothbrush in the trash, she called Indy. She plopped on the couch and put her feet up on the table. While Indy’s phone rang, she stared at the green nail polish on her toes. What a waste of a perfectly good pedicure.

Shannyn Schroeder is the author of the O’Leary series and the For Your Love series, contemporary romances centered around large Irish-American families in Chicago and the Hot & Nerdy series about nerdy friends finding love. Look for her new series – The Dating Challenge in 2019. When she’s not wrangling her three kids or writing, she watches a ton of TV and loves to bake cookies.