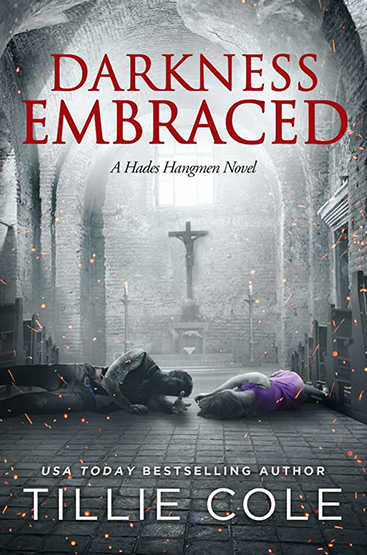 THE DEEPEST LOVE CAN BE BORN FROM THE FIERCEST HATE…

Born to sit on opposing thrones.
They were never meant to fall.

Tanner Ayers is the heir of the Texas Ku Klux Klan. Fed nothing but hate, violence, and intolerance from the day he was born, Tanner kills for his cause without remorse.
Until he meets Adelita Quintana, the daughter of the most brutal cartel boss in Mexico.
Adelita and Tanner hate each other instantly. But there is something between them that neither can explain or deny. Hate turns to desire, desire turns to love, and for the first time Tanner sees how wrong his whole life has been.
For years, Tanner does everything he can to find a way for him and Adelita. He walks away from the Klan, his family, everything he ever believed, and joins the Hades Hangmen. But now the Hangmen are at war—not only with his own family, but with Adelita’s too.
When Adelita and Tanner are thrown together again, they are forced to fight for a love that should never have been. For a love that puts them and everyone they have ever loved in danger.
The White Prince.
The cartel princess.
And a future that seems shrouded in darkness…

Tillie Cole hails from a small town in the North-East of England. She grew up on a farm with her English mother, Scottish father and older sister and a multitude of rescue animals. As soon as she could, Tillie left her rural roots for the bright lights of the big city.

After graduating from Newcastle University with a BA Hons in Religious Studies, Tillie followed her Professional Rugby player husband around the world for a decade, becoming a teacher in between and thoroughly enjoyed teaching High School students Social Studies before putting pen to paper, and finishing her first novel.

Tillie has now settled in Austin, Texas, where she is finally able to sit down and write, throwing herself into fantasy worlds and the fabulous minds of her characters.

Tillie is both an independent and traditionally published author, and writes many genres including: Contemporary Romance, Dark Romance, Young Adult and New Adult novels.

When she is not writing, Tillie enjoys nothing more than curling up on her couch watching movies, drinking far too much coffee, while convincing herself that she really doesn’t need that extra square of chocolate.