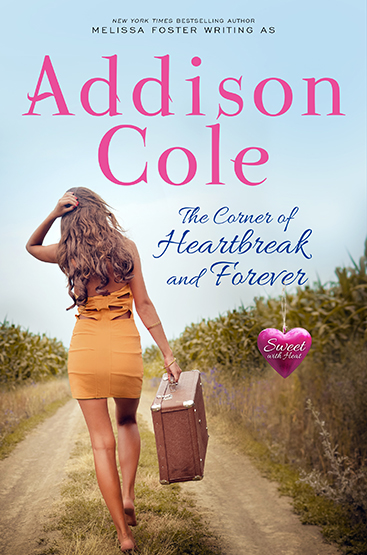 In The Corner of Heartbreak and Forever...
Leaving New York City and returning to her hometown to teach a screenplay writing class seems like just the break Grace Montgomery needs. Until her sisters wake her at four thirty in the morning to watch the hottest guys in town train wild horses and she realizes that escaping her sisters' drama-filled lives was a lot easier from hundreds of miles away. To make matters worse, she spots the one man she never wanted to see again-ruggedly handsome Reed Cross.

Reed was one of Michigan's leading historical preservation experts, but on the heels of catching his girlfriend in bed with his business partner, his uncle suffers a heart attack. Reed cuts all ties and returns home to Oak Falls to run his uncle's business. A chance encounter with Grace, his first love, brings back memories he's spent years trying to escape.

Grace is bound and determined not to fall under Reed's spell again-and Reed wants more than another taste of the woman he's never forgotten. When a midnight party brings them together, passion ignites and old wounds are opened. Grace sets down the ground rules for the next three weeks. No touching, no kissing, and if she has it her way, no breathing, because every breath he takes steals her ability to think. But Reed has other ideas...

“Grace…” Even after a decade her name tasted sinfully good rolling off his tongue.

Her hand slid from the doorknob, hanging limply by her side. She opened her mouth to speak, but no words came. A long moment later, “Reed,” slipped from her lips like the secret he’d once been.

His gut clenched with longing. He couldn’t help but study her—and that angered him as much as it eased the worries about his ability to feel that had plagued him for years. He hadn’t been all in with a woman since Grace, and he’d begun to think he’d exaggerated what he’d felt when they were together. But there was no misreading the heat thrumming through him. She looked incredible, and confused, and as her hand settled on her hip—the hand he remembered all too well digging into his back when they’d made love all those years ago—he realized she also looked angry. Definitely angry.

In the space of a breath he was fighting the urge to figure out how to spend time with her and recapture the fire between them despite everything she’d put him through.

“Are you done gawking?” she snapped.

“I…Sorry. You caught me off guard. I was expecting to see your parents.” He held her gaze, forcing a smile even though he suddenly felt stuck somewhere between a teenager caught peering through a window, a jealous ex-boyfriend, and a lust-filled man.

She folded her arms over her chest, forcing a barrier between them, and smirked.

At least he hoped it was a smirk rather than a scowl. After the clues he’d missed with his ex-girlfriend, Alina, who had been sleeping with his now ex-business partner, he no longer trusted his instincts where women were concerned. And when it came to Grace Montgomery, he’d never been able to think past the emotions she stirred within him and the future he’d hoped they’d have. She was the tsunami that had obliterated everything else in his world, and as he struggled to find his voice, he fought the urge to tangle his hands in her thick, lustrous hair and remind her of what she’d walked away from.

“I hope you don’t look at my mother like that,” she snapped.

“What? No. C’mon, Grace.” In her eyes he was probably a quintessential jerk, checking her out without any thought to their past. In reality, he’d been taken just as off guard by his leering as she was. “I don’t usually—”

“Believe it or not, yes,” he said angrily. “Who do you think I’ve become? I didn’t expect you to walk out here at all, much less wearing nearly nothing and…” He tried to figure out what to say next, what to feel…

He studied her, while trying not to at the same time. The chip on her shoulder was bigger now, overshadowing the sexy smirk on her lips. She’d always exuded confidence, but somehow that, too, seemed more intense. His heart thumped harder with the memory of the first time he’d spotted her standing on the sidelines in her cute cheerleading uniform as he headed out to the football field. She’d challenged him with her glare, as if she were playing on the rival team rather than cheering for them. She’d hated that cheerleading outfit, but man, he’d loved it. And that challenge she’d emitted? He’d taken her up on that in a hot second.

But she’d kicked him to the curb once, he reminded himself. Why was he giving her any consideration at all? He had a job to do, and sure, he’d momentarily lost his footing and checked her out, but it wasn’t like that was a crime. She was hot, and they had history. That’s as far as it goes.

Addison Cole is the sweet alter ego of New York Times and USA Today bestselling and award-winning author Melissa Foster. She writes humorous and emotional sweet contemporary romance. Her books do not include explicit sex scenes or harsh language. Addison spends her summers on Cape Cod, where she dreams up wonderful love stories in her house overlooking Cape Cod Bay.

Addison enjoys discussing her books with book clubs and reader groups and welcomes an invitation to your event.