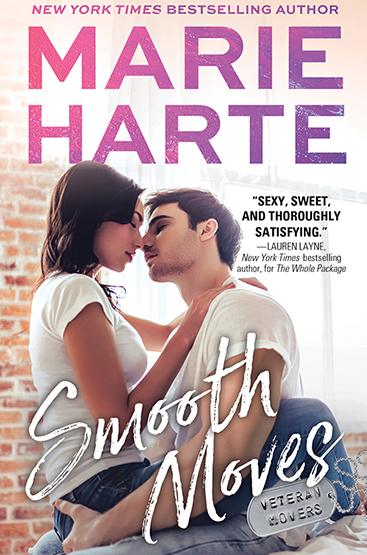 He may be all brawn
But when it really counts... His heart is all gold

Former Marine Cash Griffith is a brawny beacon for trouble, always finishing a fight that someone else starts. Working at his family's moving company, he does his best to keep a low profile, but he can't help but tangle with the newest employee, Jordan Fleming.

When Jordan joins Vets on the Go! she has her hands full with her new job and her rebellious teenage brother, not to mention going toe to toe with the obnoxious, arrogant, incredibly hot Marine at work. Soon their battles turn to camaraderie, and one kiss leads to a connection neither of them expected. But when dark secrets come to light, will their bond break...or strengthen into a happily-ever-after they desperately desire?

I love Cash. That is all. He is my new book boyfriend. Not yours. You can’t have him. He is mine. The end.

I mean, if I could have just summed it all up in one sentence I think that would have about covered it all. I mean, I truly and absolutely adored Reid and Naomi, but I have to tell you Cash and Jordan completely stole my heart!

Lots of characters, drama and dynamics were introduced in The Whole Package, and with the way it was all set up I’m so glad that Cash and Jordan were up next in Smooth Moves because I would have potentially (probably) have been harassing Marie Hart on the regular (daily) basis for it!

And if I thought there couldn’t be anymore drama add to the story-line, I was proved wrong with all the things thrown at me with Smooth Moves! There is still so much goodness to come and I just can’t stand it!!

I can not get enough of this series and I’m eagerly awaiting the next one!

In the front yard, away from the mess, the boys and their dog played. Thank God at least the kids stayed away, frolicking in the growing wet.

Cash swore and slicked his hair back, and Jordan tried really hard not to ogle the man. But the rain made it difficult to ignore the crew’s fine physiques—at least, that was her excuse.

He was part owner of the company, yet he worked alongside the guys as if just another employee. All too easily she imagined former Gunnery Sergeant Cash Griffith in uniform. Sadly, she’d noticed everything about the man from day one. Cash exuded leadership. Though what normally came out of his mouth was either crass, obnoxious, or rude, he made people laugh and somehow want to follow him. Hell, he annoyed her to no end, but she could see his natural fit for command.

He had legs like tree trunks, a broad chest, and thickly muscled arms she’d dreamed of holding her more than once. His short, dark hair spoke of time in the military, kept trim but not buzzed short. And that stubborn jaw had temped her more than once to punch it then kiss it better.

Cash’s bright-green eyes seemed to be constantly on her, filling her with heat.

As they were now.

She pretended she hadn’t been staring at him so hard, and he snorted. The big, bad man who intimidated most others didn’t frighten her in the slightest. Because Cash was a protector at heart. He might swear, act gruff, and loom over everyone with that condescending smirk, but he was always the first in line to offer to help.

And he hadn’t lashed out at the kids all day, when he’d had plenty of opportunity to do so. Especially now. She groaned. “Judy, am I seeing things, or did the boys just go inside the truck?”

Judy frowned. “They were told not to do that.”

“I see them,” he snarled. Apparently, he’d reached his limit. He stalked inside the truck, and she heard, “That’s it! You two, out, now. And take your dog with you. This is no place for kids.”

Silence reigned for a moment.

Something crashed, the dog bolted, and the boys screamed. Not a we’re-having-fun yell but the scared kind.

Everyone rushed to the truck, and Hector, closest to the ramp, hurried inside first.

“My babies!” Judy cried, but Heidi held her back from entering.

Jordan gasped. Inside, Cash looked like Atlas, crouched and holding the weight of a large grandfather clock on his broad shoulders and upper back while one of the boys lay under him, frozen in fear.

The other twin stood on a couch behind the overturned furniture, staring in shock.

Hector rushed to pull the boys out while Jordan helped a visibly straining Cash edge the clock off his shoulder.

“Why did the kids have to tip this thing over? Why not the lamp that weighs ten pounds? Oh my God. This is heavy.” She couldn’t believe he’d been holding it, crouched as he was, off the boy.

“No shit, Sherlock,” he said through gritted teeth.

Her own shoulders ached as she laughed. “Okay, okay. Don’t be so dramatic.” She paused then added the ultimate insult, “Nancy.”

Then Hector and Heidi were there, easing the furniture and a few other skewed pieces back into place.

Once everyone had exited the truck back into the shelter of the garage, Heidi glared at the twins, her accent growing thicker the madder she became. “I told you not to play in there. Nothing is strapped down yet. You could have been hurt.”

The boys looked a lot more sulky than sorry, reminding Jordan of her own brother. Rafi, who’d taken money from her wallet. Rafi, who’d involved himself with a questionable bunch of teens. Rafi, who seemed to be on the verge of throwing his entire future away. Rafi, who needed a firm kick in his teenage ass.

Sorry, Judy. This has to be done. Jordan stepped forward and grabbed each boy by the neck of his T-shirt, yanking him forward. She glared into their beady little eyes. “That. Is. It! If Cash hadn’t been there, one of you might have been seriously hurt. Or crushed.”

“Or dead,” Cash said bluntly. “That clock weighs a ton, enough to crush a tiny little skull for sure. You ever seen brains leak out of your head, kid? It’s gross.”

Hector pinched the bridge of his nose, and Jordan felt for him, sensing her own headache coming on.

She dragged them closer. “You will now thank Cash for saving your sorry little asses.”

They stared at her with wide eyes. Judy blinked at her through tears.

“And you will apologize to your mother for worrying her. She just lost your nana; she doesn’t want to lose you too. Look at her.” She shook them, not hard but enough to get their attention. “She’s worried about you.”

Judy had been silently crying.

The boys lowered their heads in shame. Jordan heard sniffles. If only it were that easy to get her brother in line.

Jordan nudged them toward Judy. “Now you go give her a hug. Then you stay with her. Because if you don’t, Cash is going to paddle your butts until you can’t sit for a week. And your mom won’t even mind.”

Cash flexed his huge hands, and Jordan saw the boys’ fright. Heck, she wouldn’t want to be spanked by a hand that large either.