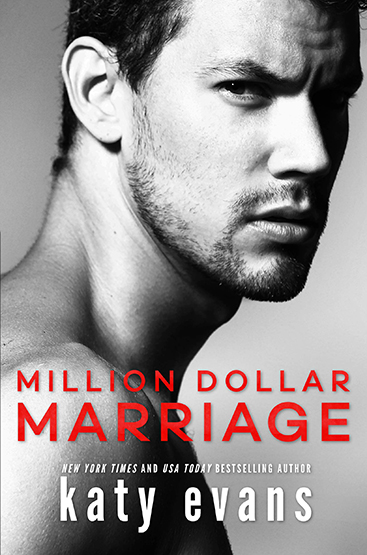 From New York Times bestselling author Katy Evans comes a hot romance about two strangers and their race to fall in love.

If someone had bet Nell a million dollars that she would be saying “I do” to a complete stranger on national television, she’d have called them crazy, but with her crushing student loan payments sending her deep into the red, she’s out of options. This should be nothing more than a business transaction—until she sets eyes on her groom, and everything changes.

The game is on the instant Luke spots Penelope “Nell” Carpenter. He’s out for the money, yes, but getting a little dirty with Nell doesn’t sound too bad either. Everyone knows he’s not the marrying kind, so it’s a good thing it’s just for show. God knows he’s the worst guy his pretty wife should pick for real.

They have nothing in common, but if they want the grand prize, they’ll have to beat out eight other couples. Proving that total opposites attract should be easy enough…as long as they don’t fall in love in the process.

I’m going to lose my lunch.

It’s the live finale the entire country has been waiting for. The arena is packed to the gills with reporters, cameras pointed at us. Flashbulbs go off, and my future seems to flash through my eyes with them.

Everything depends on what will happen in the next hour. We could give our answer in a split second, but not now. I know the announcer will drag things out to the point of sheer madness. Recaps of poignant moments from the season, interviews with contestants, performances by “special celebrity guests” who are also fans of the show.

It’s all meant to build up to the moment of truth. Every one of the people in this arena, every one of the thirteen million people watching at home—they’re all waiting on the edge of their seats with the same question.

I wish to god we could just give our answer and be done.

He’s so close, but he might as well be a million miles away. Our fingers entwined, he waves at the crowd cheering our names. His hand isn’t the least bit clammy. I manage a peek at him, his chiseled features, his relaxed smile, and my throat catches.

No wonder the world is in love with him. No wonder he’s been the fan favorite since week one.

So I do. But air is not the only thing I need to make me okay right now.

We’ve been through so much, more than most couples will go through in entire lifetimes.

And now we’re about to make the decision that will shape our future.

Somewhere along this crazy little adventure we’ve been having, played out on television for the entire world to see, I did what I told myself I’d never do.

I don’t even know how it happened, but as I look back, it seems so inevitable. Like I couldn’t have stopped it, even if I’d tried.

But just because it was meant to happen doesn’t mean it will last forever . . .

Katy Evans is a New York Times, USA Today, and Wall Street Journal bestselling author. Her debut REAL shot to the top of the bestselling lists in 2013 and since then 9 of her titles have been New York Times bestsellers. Her books have been translated into nearly a dozen languages across the world.