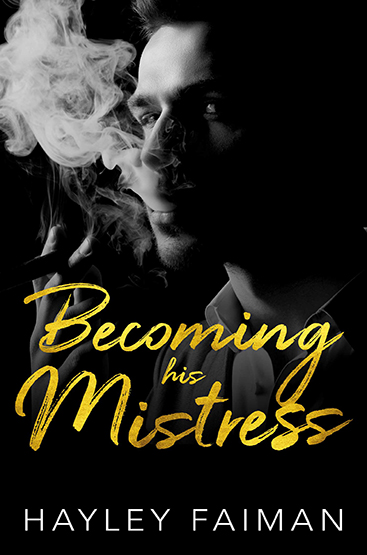 As an Underboss for the Zanetti famiglia, Arlo Zanetti has agreed to marry for duty rather than love. In fact, he abhors the woman he’s forced to walk down the aisle with.

However, duty and the famiglia mean everything to him. He’s not a man that skirts his responsibilities, even to his own detriment.

That is, until he sets his sights on Elenora Lewis. She’s everything he’s attracted to and everything he thought he could never have.

Elenora should run from him. She can feel the danger oozing out of Arlo’s very core. However, she has a problem, she’s fallen for him, head-over-heels. His blue eyes hold her completely captive.

Secrets, lies, betrayal, and infidelity plague them both. Guilt fills them, their morals are completely obliterated. Unsure if they’ll make it out alive, this is the second book in the Zanetti empire. 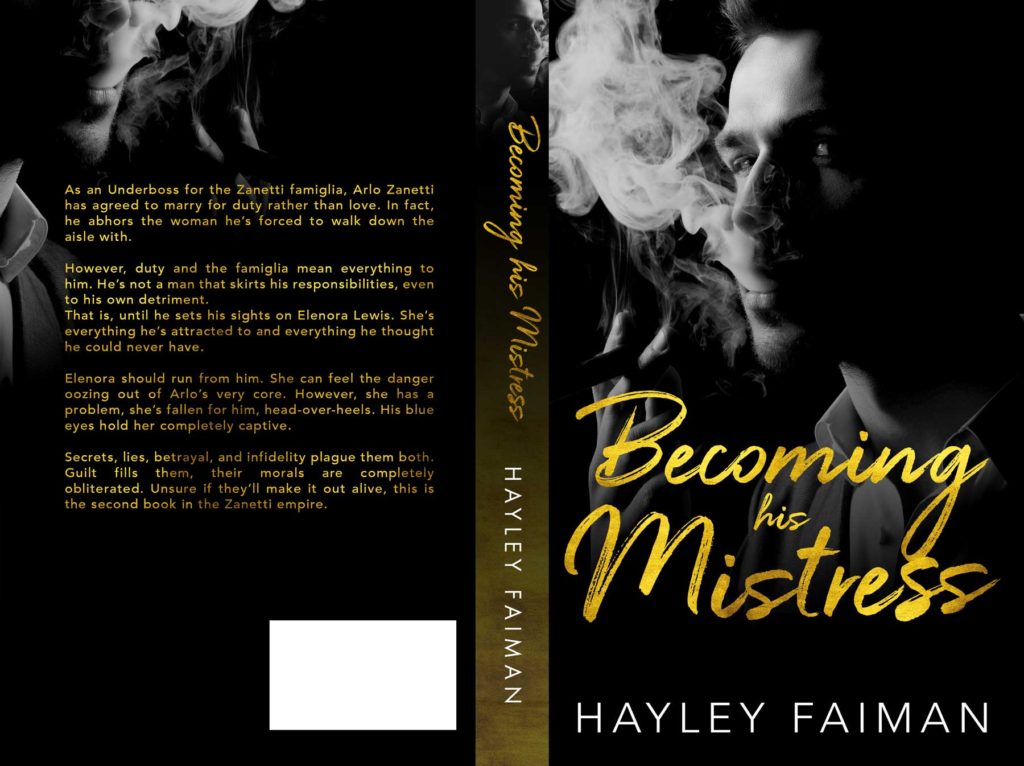 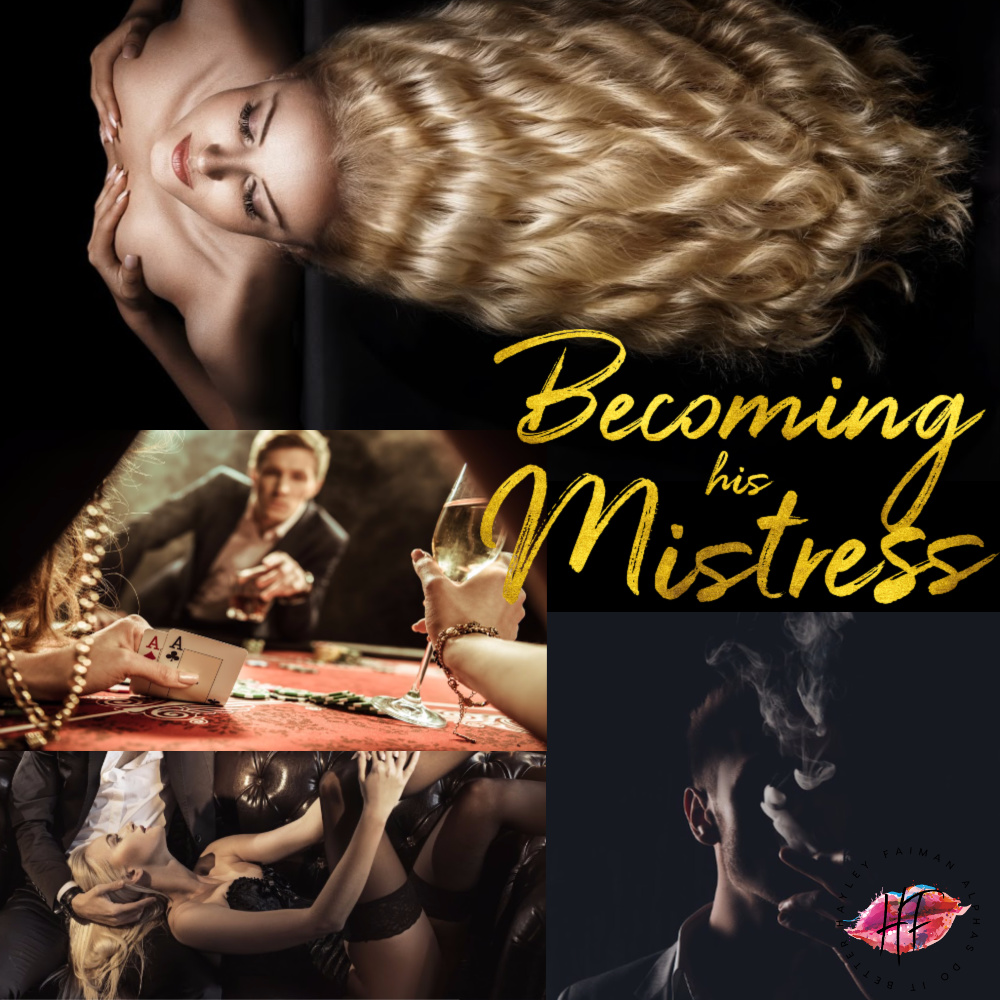 As an only child, Hayley Faiman had to entertain herself somehow. She started writing stories at the age of six and never really stopped.
Born in California, she met her now husband at the age of sixteen and married him at the age of twenty in 2004. After all of these years together, he’s still the love of her life.
Hayley’s husband joined the military and they lived in Oregon,where he was stationed with the US Coast Guard. They moved back to California in 2006, where they had two little boys. Recently, the four of them moved out to the Hill Country of Texas, where they adopted a new family member, a chocolate lab named Optimus Prime.

@romanceaddictbb
•
Follow
NOW LIVE! Exiled by Brenda Rothert is available now + FREE in Kindle Unlimited! US: https://amzn.to/3JthE9T UK: https://amzn.to/3qkhBpz CA: https://amzn.to/3inY1Ec AU: https://amzn.to/3Jpo9dH Add to your Goodreads TBR ➩ https://bit.ly/38iJsA1 Pro hockey player Archer Holt is taking his charm and swagger from the ice to the...sand? One of sixteen players competing to be the last man standing on a new reality show, he’s all in until he finds out the meaning behind the show’s title—Exiled. Archer Before I was a pro hockey player, I was an Eagle Scout. I can tie knots, build shelters and fish like nobody’s business, making me the perfect choice to represent my team on a reality show set on a primitive tropical island. I can endure scorching heat, tough competitions and torrential rainfall—no problem. But when I find out who my partner is, I’m not so sure I’ll survive being stranded on an island with her. Lauren Archer Holt broke my heart eight years ago. Now he’s rich and famous, and I’m a high school English teacher in our hometown. When I’m offered the chance to compete for half a million dollars by outlasting fifteen other teams on an island with my selfish jerk of an ex, I jump at it, because that money can change not just my life, but my family’s. Besides, I’m long over Archer. Or so I thought. #Exiled #BrendaRothert #newbooks #enemiestolovers #hockeyromance #givemebookspr #kindlebooks #standaloneromance #strandedonanisland #secondchanceromance
View on Instagram |
1/8

@romanceaddictbb
•
Follow
Okay, people, it’s happening! This is not a drill!!! This emotionally gripping single dad/single mom romance is going to blow your mind. Get ready for a wild ride of twists and turns!!! Link in Profile… In the aftermath of tragedy, it’s strange the things you remember. The deafening boom as the house exploded. The paralyzing fear as I searched for my wife. The blinding smoke burning my eyes as I carried her out. But carved into my soul for the rest of my days would be the earth-shattering realization that the woman in my arms wasn’t my wife. Bree and I were the only survivors—not that either of us were truly living after that night. As a single dad with nowhere else to go, I moved into her guest house. And somehow, through the guilt and grief, we forged an unlikely team. It took years, but I watched the gradual return of her smile—slow and life-altering.The two of us could sit outside for hours, talking about nothing, and it filled the massive hole in my chest with new life. I may have carried her out of that fire, but the truth was, Bree saved me. As we healed, the secrets and lies of the past smoldered in the ashes, threatening to ignite again. Our love was born from the embers, and together we would go up in flames. #romancebooks #bookstagram #alymartinez #romanticsuspense #fromtheembers
View on Instagram |
2/8

@romanceaddictbb
•
Follow
🔥🔥COVER REVEAL🔥🔥 THE COMIC CON by @deelagasse is coming May 4! #PreOrderHere https://books2read.com/u/bxQejP Here’s what you can expect from The Comic Con: ❗A sassy plus size comic book creator ❗A hot AF Hollywood heartthrob ❗All the laughs and just as many feels ❗To feel empowered and worthy (because you are!) ❗Birdie Yamamoto has lived in a fantasy world for as long as she can remember. When she was a young child, she buried herself in comic books. As a teenager, she created stories of her own. Now she has her dream job, as a series writer for Suffra-Jette -- her very own comic. Atticus Cohen has perfected the art of pretending to be someone he’s not. The rising Hollywood actor lands the role of a lifetime – a lead in the latest big budget superhero movie: Suffra-Jette. The rigorous workouts, grueling schedule, and relentless press are all things he expects when he takes the job. What he doesn’t expect is comic creator, Birdie Yamamoto, to have an opinion about everything he says or does. When word spreads about the trouble on set, fans of the beloved comic begin to worry about the outcome of the movie. Birdie and Atticus may not always be on the same page, but they both want the movie to succeed. So when Birdie’s best friend suggests they pretend to date to save the movie, they agree. After all, it’s just a publicity stunt to spin the bad press. …Until it isn’t anymore. Add to your Goodreads TBR link: https://bit.ly/36QLKGv #comingsoon #needtoreaditnow #comiccon #readyourheartout #needtoreaditnow #spicyreads #suffrajettesisterhood #booknerdigan #bookaholic #wildfiremarketingsolutions
View on Instagram |
4/8

@romanceaddictbb
•
Follow
𝘿𝙤 𝙮𝙤𝙪 𝙧𝙚𝙖𝙙 𝙤𝙣 𝙍𝙖𝙙𝙞𝙨𝙝❓ Calling all lovers of steamy romance, fans of Vampire Diaries and Twilight! One of my favorites @kendallryan1 has dropped a new release on the Radish app TODAY! Living as a reclusive billionaire bachelor for the past century or so has had its perks, but my existence is now the very definition of boredom. I need something different. Something new. Fresh meat, my brother Alastair encourages. Seeking to make some changes in my life, I hire a sweetly innocent, and decidedly human, young assistant named Tressa Porter. She moves into my mansion but instead of curating my library, she begins tearing down my carefully constructed walls. At first it's the little things—the way she nibbles on lower lip and scrunches her nose when she's deep in thought, her optimism, her maddeningly delicious scent ... And soon my needs can no longer be denied. I've never needed anything like I need to taste her. Though strangely, seeing her smile has become a close second. The dark place in my soul yearns for more but I have a life or death decision to make—deny my instincts and send her away, or satisfy my cravings and hope I don't destroy the thing I hold most precious. You can find Radish Fiction by searching on the App Store and Google Play. Once you’ve got Radish downloaded, type Kendall Ryan into the search bar! #bookstagram #readmoreromance #spicybooks #addictedtobooks #vampireromance #billionaireromance #forbiddenromance #forcedproximity #beautyandthebeastretelling #twilightrenaissance #radishfictionbooks #readonradish #radishfiction #romance #newrelease #bingeread #oneclick #mustread #lostinthepages #bookobsessed #epicreads #favoriteauthor #ireadromance #romancenovel #romanceaddict #bookblog #readingromance
View on Instagram |
5/8

@romanceaddictbb
•
Follow
Once Upon A Bet by @bloompenelope is officially live and available on Amazon! You can get it here --> https://amzn.to/3I2nJZn All I ever wanted was the perfect happily ever after. All he ever wanted was to ruin my freaking life. Okay, that’s a smidge dramatic, but hear me out. My new neighbor might as well plant an “unavailable” sign in his front yard. He’s got biceps made for pulling swooning maidens out of danger, eyes built for melting glaciers (and panties), and a smile that makes my knees want to buckle. But he’s grumpy, stubborn, divorced with two kids, and he’s only in town for three months. It’s pretty obvious I need to stay far, far away. But then he kisses me. First, I see stars. Then I see babies with steely blue eyes and chiseled jawlines. I see white-picket fences and just maybe that happily ever after I always dreamed of. He says the best he can do is three months of casual fun. No feelings. No attachments. Then he’ll move on, and so should I. Remember the part about him ruining my life? Yeah, I didn’t even get to it yet. That all started with a bet. #romance #newrelease #bingeread #oneclick #mustread #lostinthepages #bookobsessed #epicreads #favoriteauthor #ireadromance #romancenovel #romanceaddict #bookblog #readingromance #paperback #bookshelf #onceuponabet #penelopebloom #kindleunlimited #ku #romcom #grumpysunshine #singledad
View on Instagram |
6/8

@romanceaddictbb
•
Follow
NOW LIVE! Moonshot by @authorlmfox is available now + FREE in Kindle Unlimited! 99c for a limited time! US: https://amzn.to/3wdUVLh UK: https://amzn.to/3thlUDW CA: https://amzn.to/34QBPj6 AU: https://amzn.to/3JdYfJY Add to your Goodreads TBR ➩ https://bit.ly/3iI2W35 Ava He calls me Elsa. Ironic given he’s the one who can deliver a frosty reception. Yet between the hot physique, smoldering sex appeal, and his warm, sweet smile, this ice queen is melting for him a little more each day. I pray he’s not like the rest, giving me the cold shoulder once the challenge is met. Because I’m ready for the fairy tale. Mick When you’re benched from your professional baseball career, you learn how cold the world is. I’d lost my dream job and my girl. Never again. Until this Nordic beauty slowly chips away at my resolve. There’s no stopping it. I’m falling hard for this elusive princess. But can I trust this fantasy girl could be my forever and not another nightmare? Because Ava deserves a happily ever after, and I’m just the man for the job. #Moonshot #LMFox #newbooks #workplaceromance #sportsromance #kindlebooks #forcedproximity #contemporaryromance #givemebookspr #standaloneromance
View on Instagram |
7/8

@romanceaddictbb
•
Follow
🔥🔥TEASER BLAST🔥🔥 THE PROJECT by @rl_mathewson is coming May 20! #PreOrderHere Amazon https://amzn.to/3q7Cvrx Apple https://apple.co/3IeKQA4 Nook https://bit.ly/3JlqqH9 Kobo https://bit.ly/3qh06WV From New York Time’s bestselling author of the Neighbor from Hell series comes a heartwarming romantic comedy about the only thing that matters when you’re about to lose everything that you’ve ever wanted. The one person that you can’t live without. She should probably mention that she had no idea what she was doing, but since that would probably result in her new boss, Devyn MacGregor, CEO of Carta Hotels and the incredibly handsome man that didn’t look like he knew how to smile, firing her, Andi Dawson decided that it would be in her best interest to keep that fact to herself. After years of doing a job that had slowly destroyed her will to live, she needed a change, something different, something that gave her a clue about what she was supposed to do with her life, but more importantly, she needed to figure out how she was supposed to keep a secret that could destroy the only thing that mattered to her. Just. One. More. Time. Devyn was so close to having everything that he’d ever wanted when everything suddenly went to hell. He should have seen this coming, should have stayed focused, and he really should stop thinking about the small woman that he should probably fire. He had four months to fix this and he had no idea how he was going to do it, but he knew that he was about to make the biggest mistake of his life. #comingsoon #romcom #instabook #bookstagram #readmoreromance #readyourheartout #newbookalert #bookaholic #booknerdigan #wildfiremarketingsolutions
View on Instagram |
8/8