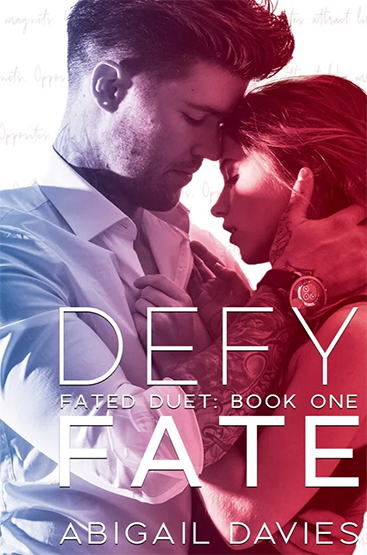 The pain of the past encompassed my soul. It was on a path to destroy me—that was if I didn’t do it myself first.

I was drowning in the depths of my sorrow, trying to push through each day to get to the next. And then he turned up.

There was a time when he was the only beam of light within the darkness. But he snatched that away when he left and forgot all about me.

Only now he was back, and standing at the front of my World History class. Cade Easton was no longer the charming sixteen year old who never failed to put a smile on my face. Instead, he was my new teacher.

They said there was nothing quite like your first love. That all consuming feeling—the infatuation.

It should have mattered that I was his student, but it didn’t. And neither did the eight year age gap.

Age was just a number.

Time which would pass us both by.

And there was nothing that could stop us.

Until my past resurfaced and threatened to demolish everything we’d built. With Cade by my side, I was sure I’d conquer everything.

I just hoped he stayed there.

A thousand steps separated us, but nothing could keep us apart.

“What?” It was Cade whose tone was one of disbelief. “You have a 3.8 GPA. Of course you should go to college.”

I shrugged, thankful I could see our food being brought to the table. “I don’t even know what I’d do in college. I’m not…” I trailed off, not wanting to say the rest. I wasn’t going to reveal myself to everyone around this table, not when I wouldn’t admit it to myself. I’d keep my worries inside and let them out the way I normally did: alone.

Thankfully, the conversation was interrupted by our plates being placed in front of all of us, and Sal finally sat on the other side of Asher. I leaned over to help cut up Asher’s food.

“You could get a scholarship,” Mom announced, and I flicked my gaze up to her. She hadn’t touched her food yet, her focus not waning from me. “You said you’d try out for track this year,” she reminded me.

I gritted my teeth and stared into her eyes. I had said I would try out for track, but that was before I knew Cade would be the coach.

“You’re trying out for track?” Cade asked, but I couldn’t answer him. I couldn’t form any words.

I felt Cade shuffle in his seat, his arm a whispering touch against mine, and I pulled in a sharp breath. “I am. Tryouts are next week.”

Mom smiled up a storm as she said, “Aria will be there.”

Everyone started to murmur between themselves, but I couldn’t do anything but look down at my food and try to regulate my breathing. She’d spoken for me, and I hated that, but I wouldn’t call her out. I was the kind of person who kept it inside and let it go, but it didn’t mean it wouldn’t eat away at me.

Running was something I did for me, not for anyone else, and the fact that my legs were shorter than most of the girls on the track team would probably mean I wouldn’t come anywhere close to their times. Maybe I wouldn’t even make the team.

My feet bobbed up and down on the floor as I resisted the urge to bite my fingernails. I was on the brink of something, I just didn’t know exactly what it was.

A hand landed on my knee, large fingers gripping it to stop my momentum. I swallowed as my breathing picked up, but didn’t turn to face Cade.

“You’re making the table shake,” he whispered in my ear, his breath fanning across my neck. I hated that it made me shiver, hated that having his hand on me soothed all my crazy thoughts instantly. One touch shouldn’t be able to calm me the way it had.

“Sorry,” I croaked out, turning to look at him. His dark-blue eyes shone bright, but this close, I could see the starburst of green around his pupil. “I just…” I didn’t know what I was going to say to him. His hand was still on my knee, his thumb rubbing back and forth. “I want to go home,” I finally managed to say, not shying away from the truth.

He blinked, something swirling in his gaze, and then he nodded. He didn’t look away. Instead, he kept his attention on me, almost as if he were searching for something. My heart hammered in my chest, and my fingers itched to reach out and run across the slight stubble lining his jaw. For the first time since he’d left for college, I didn’t feel so…invisible. They said the eyes were the gateway to the soul, and I never believed it until this very moment.

I wasn’t sure what was swirling between us, but when Uncle Brody said, “What do you think, Cade?” It broke whatever spell we had both been under. His hand snapped back from my knee, and he stopped looking at me. I craved to pull him back around, to stare into his eyes again, but it was gone, like everything else in my life.

Abigail Davies grew up with a passion for words, storytelling, maths, and anything pink. Dreaming up characters–quite literally–and talking to them out loud is a daily occurrence for her. She finds it fascinating how a whole world can be built with words alone, and how everyone reads and interprets a story differently. Now following her dreams of writing, Abigail has found the passion that she always knew was there. When she’s not writing: she’s a mother to two daughters who she encourages to use their imagination as she believes that it’s a magical thing, or getting lost in a good book. If she’s doing neither of those things, you can be sure she’s surfing the web buying new makeup, clothes, or binge watching another show as she becomes one with her sofa.