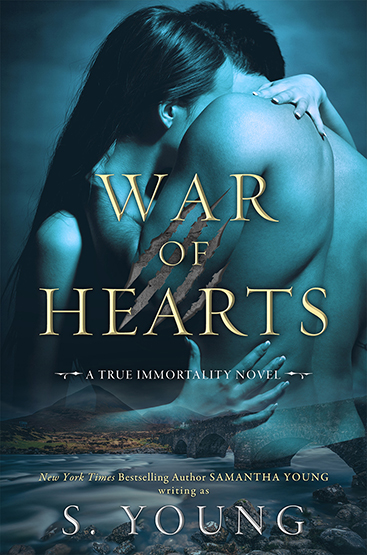 Thea Quinn has no idea what she is. All she knows is that her abilities have been a plague upon her life since she was a child. After years of suffering at the hands of a megalomaniac, Thea escaped and has been on the run ever since.

The leadership and protection of his pack are of the utmost importance to Conall MacLennan, Alpha and Chief of Clan MacLennan, the last werewolf pack in Scotland. Which is why watching his sister slowly die of a lycanthropic disease is emotional torture. When Conall is approached by a businessman who offers a cure for his sister in exchange for the use of Conall’s rare tracking ability, Conall forges an unbreakable contract with him. He has to find and retrieve the key to the cure: dangerous murderer, Thea Quinn.

Thea’s attempts to evade the ruthless werewolf are not only thwarted by the Alpha, but by outside dangers. With no choice but to rely on one another for survival, truths are revealed, intensifying a passionate connection they both fight to resist. At war with themselves and each other, Conall and Thea’s journey to Scotland forces them to face a heartrending choice between love and betrayal.

Stepping back inside the motel room, Thea halted as Conall came out of the bathroom. His height caused a logistical problem for her next move.

Although his color hadn’t fully returned to normal, the wolf was looking much stronger. She didn’t know if she could take him in a fight when he was at full strength, which was more than a little concerning. As if he’d read her mind, he cut her an expressionless look. “You should have left me to die, lass.”

“Probably. I guess I’m just going to have to take the chance you were bluffing.”

He frowned and opened his mouth to question her, but Thea had already made her move.

Before he could comprehend it, she was on the bed behind him and reaching for his head before his weakened reflexes could catch up.

The crack of his neck echoed around the room, causing a sick lurch in Thea’s stomach.

For some reason, stupid tears stung her eyes as she watched his body hit the ground with an almighty thud. Why should she care? It wasn’t like he was dead. She’d knocked him out. For … however long he took to heal.

And he had stuck her with that goddamn injection.

Thea jumped off the mattress, avoiding Conall’s body. Earlier when she’d been treating his wounds, she’d spied the syringes in the first aid kit. Grabbing them, Thea hurried out of the motel room and toward the fields beyond. Quickly she dug a hole with her bare hands and buried the syringes. Hurrying back, she avoided staring at Conall because he looked very much dead.

She grabbed his wallet and as she took his money, leaving him his credit cards, a folded-up photograph caught her attention. Curiosity got the better of her and she pulled it out. Smoothing her fingers across the picture, she spotted who she thought was Conall only to realize it wasn’t. The man who looked like him was standing next to a much younger Conall, and Thea deduced it was his father. The younger Conall had his arm around the waist of a small, redheaded girl buried into his side. And beside the man she’d mistaken for Conall was a beautiful redheaded woman.
Was this Conall and his family?

They were standing on a rocky beach, a beautiful lake and mountains behind them.

Thea wondered which one of them was sick. Which of these people was he willing to sacrifice her for?

Memories of her own parents swelled in her throat, burning and screaming to get out. But Thea shoved them back down as she shoved the photograph into his wallet.

There were times she pulled those memories out and let herself swim in the pain because it was worth it to remember the happy moments.

But now was not the time.

With a ruthless supernatural sure to wake up from a broken neck wanting to kill her, and some unknown entity out there hunting her too, now was very much the time to go.

Samantha Young is a New York Times and #1 International bestselling author from Stirlingshire, Scotland. On Dublin Street was Samantha's first adult contemporary romance series and has sold in thirty countries. She has since published over thirteen romance titles including the New York Times Bestsellers Into the Deep, Hero, and her most recent contemporary romance Fight or Flight. When writing Adult Paranormal romance she writes under the pen name S. Young.