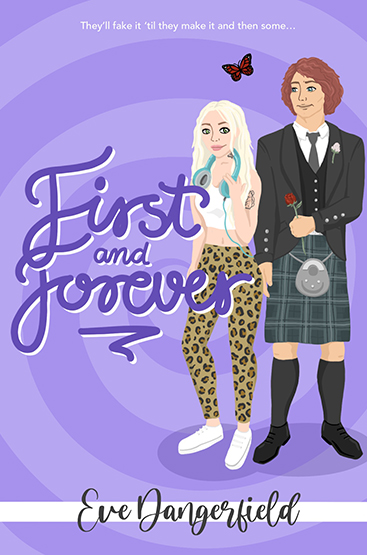 They’ll fake it ‘til they make it and then some…

Football player Sloan ‘Willow’ Williams has been looking for The One for years. He’s checked all the right places—and some of the wrong ones—and found sh*t all. But the moment he sees Eden Jade Cartwright, he knows she’s the girl for him.

Unfortunately, her entourage won’t let him anywhere near her...

Eden doesn’t want anything, aside from an international music career. She does, however, enjoy being worshipped, which the giant redhead seems inclined to do. But with a world tour beckoning, now isn’t the time for a boyfriend...

Willow has the perfect solution; a short, fake relationship that will boost Eden’s clout and scratch both their itches. Only he’s hoping the beautiful blonde will keep him around. And Eden's praying she’ll be able to let him go…

First and Forever is a standalone romance by the critically acclaimed author Eve Dangerfield.

The thought reverberated around Willow’s head alongside the trance beat. Her trance beat. Eden Jade—better known by her DJ name, Bunny Descent, stood behind the decks on stage, one hand raised. The lights turned her white-blonde hair to pink and her ripped wedding dress was spattered neon by the leaking glow-sticks her fans were waving.

Her perfect face was screwed in concentration as she fiddled with something on the decks. The music transitioned from a hard, pulsing beat to something Willow recognised—‘Self Care’ by Mac Miller. The crowd cheered, more people rushing toward the stage, hands raised. It was three in the morning and the tiny dance floor was thrumming.

Willow had expected the crowd to thin as the night wore on, but the opposite happened. Bunny Descent was the seventh DJ of the night, and the audience was more hyped for her than anyone else. Watching the crowd dance, he felt a surge of pride. From what he’d read in interviews, Eden was scared of not breaking through, worried her sound was too erratic for main stages. But there was no way the woman in front of him wasn’t making it big. She oozed glamour and with each and every song, he grew more amazed she wasn’t famous.

Willow turned and saw the guy was talking to his equally fucked up mate, but that didn’t change the fact he was vocalising his own thoughts about Eden.

I’m different, he told himself.

That had always been the only reason he needed. People called him overconfident, but that implied he tried to be confident. He didn’t. He was just lucky. He got what he wanted.

As the music surged higher, Willow danced along with the crowd, working his weight from foot to foot. A few girls smiled, looking for someone to kiss—or maybe because they recognised him, but he only had eyes for Eden. On stage she leant forward, touching the hands of the people dancing in front of her. The second she made contact, the crowd screamed fit to burst the roof. Willow knew exactly how they felt.

He’d been scoping her Instagram for ages, but there was nothing like seeing her in real life. With her long blonde hair and big eyes, she looked like Sailor Moon—his first and most powerful crush. He watched as Eden put her hands behind her head and shook, her tits bouncing in her wedding dress. Attraction burred through him like an electric current. He’d never been so into anyone. Even Sailor Moon. What could that be but true love? As he watched her dance, he made himself a promise—come hell or high water, he’d talk to her tonight.

A hard elbow bashed his side.

“Oi,” Derek shouted over the music. “What are we still doing here? Everyone’s out of their minds.”

Willow danced away from his friend. “I dunno. I’m not tired.”

Willow glanced around. Patrick Normal, better known as Psycho, was swaying softly beside the bar, apparently having forgotten he wanted a beer. “Psycho’s… having a time.”

“Yeah, he’ll be up for hours. Better we’re still out with him, hey?”

“This is all your fault. If Mara was in town, I wouldn’t be here.”

The track Eden was playing bled into a remix of that Rasputin, love machine song. The dancers packed around the stage, jumping so hard the floor shook. Eden swished her white-blonde hair over her shoulder and his cock throbbed. He could see her doing that while she rode him—looking down her nose as he worked to make her come.

His side burst with pain. He rubbed it, glaring at Derek. “What’s your problem?”

“You could hear that?”

“Of course, I…” A look of barely concealed terror dawned on Derek’s face. A look Willow knew all too well. He backed away in case Derek decided to put him in a headlock. “What have I done now?”

Derek pointed at the stage. “Please tell me we’re not here because you want to fuck that DJ?”

Willow gave him a winning smile. “Do you want a drink?”

“I wanna know if you dragged me all the way to the city to watch you fail to pick up a DJ.”

Eve Dangerfield has loved romance novels ever since she first swiped her grandmother’s paperbacks. Now she writes her own stories about complicated women and gorgeous-but-slightly-tortured men. Her work has been described as 'genre-defying,' 'insanely hot' and ‘the defibrillator contemporary romance needs right now'...and not just by herself or those who might need bone marrow...OTHER PEOPLE! She lives in Melbourne with her boy and a bunch of semi-dead plants. She can generally be found making a mess.