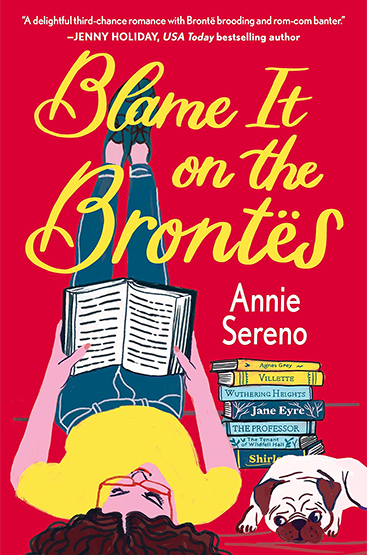 English professor Athena Murphy is an authority on the novels of the Brontë sisters. But as they say in academia, publish or perish. To save her job, Athena decides to write a biography of C.L. Garland, the author heating up bestseller lists with spicy retellings of classic literature. Tracking down the reclusive writer and uncovering her secret identity, though, means Athena must return to her small midwestern hometown where Garland—and her ex-boyfriend, Thorne Kent—live.

Seeing Thorne again reminds Athena that real life never lives up to fiction. He was the Heathcliff to her Catherine, the Mr. Rochester to her Jane. Not only did their college breakup shatter that illusion, they broke each other’s hearts a second time. Now she has to see him nearly every... single… day.

The only solution is to find C.L. Garland as quickly as possible, write the book, and get the heck out of town. As her deadline looms and the list of potential C.L. Garlands dwindles, Athena and Thorne bicker and banter their way back to friendship. Could it really be true that the third time’s a charm?

Blame It on the Brontes was a super fun and easy read!

I also love a good mystery. Athena comes back home because she has promised a book on who the best selling romance author, C.L. Garland, really is.

Again, this is a super cute and fun read. I enjoyed Althena’s quirkiness as she navigated all the moving parts in her life, and Thorn’s love for Althena was inspiring and heartwarming. Loved how they had to learn to trust one another again.

When she's not expressing her imagination with pen and paintbrush, Annie gardens, swims, and haunts art museums. In possession of a well-worn passport and memories of all the places she's called home, she shares her life with her husband and two sons.
Mildly (okay, seriously) obsessed with birds, Celtic music, and all things Australian, she believes there is no such thing as a former librarian, no time to read, or too many shoes.